The Art of the London Pub Crawl – Part Three

In the windows of the Seven Stars, not far from Fleet Street, and a short technicality away from the formidable Royal Courts of Justice, there are two displays – the Cabinet of Largesse and the Cabinet of Jurisprudence.

Drawing on archaic legalese, in reference to the industry of law all around, the cabinets display mangy taxidermy, feathers and decorated skulls – a merry and mildly mad musiological moment in a pub that dates back to 1602. It set the tone, for me, for a journey of discovery into the culture of the London pub.

This was the first pub that my Dad and I visited on the latest leg of my pub crawl following the pub Taverns of London by H.E. Popham, published in the late 1920s.

In those roaring times, the pub had ‘a large following among the clerks of the neighbouring Courts and lawyers’ offices. Some authorities hold the opinion that this is “The Magpie and Stump” of Pickwick Papers…”.

The landlady was a vivacious woman, perched drunkenly on a stool, with a sombre cat in a ruff collar sat at her feet, sad and mute. Dried hops circled the room like a crown, or a distant pagan memory of the countryside, and the pictures that adorned the walls were a delirious cocktail of photographs and film posters.

The pub was small, but full, and the guests were largely pleasant and quiet groups of middle-aged friends. We supped a Guinness each, and tried in vain to engage the landlady in conversation. Dad sketched the pub, and I sketched Dad. It is not good enough to share (and I’m happy sharing some pretty bad stuff).

(A sketch of the Seven Stars cat)

We had already been exploring London a little, the world’s largest public art gallery. In Parliament Square Winston Churchill loomed enormous, lurching dangerously on his stick, while a reborn Lammassu stood defiantly on Trafalgar’s Fourth Plinth, and all through gardens along the banks of the Thames were statues and sculptures of all kinds.

At Two Temple Place we discovered an exhibition about the jazz age, with a heady swirl of paintings, music, musical instruments and costumes. It seemed somehow fleeting in the solid weight of the wooden interiors and gleaming stained glass windows. After this, a drink at the Seven Stars was much needed. 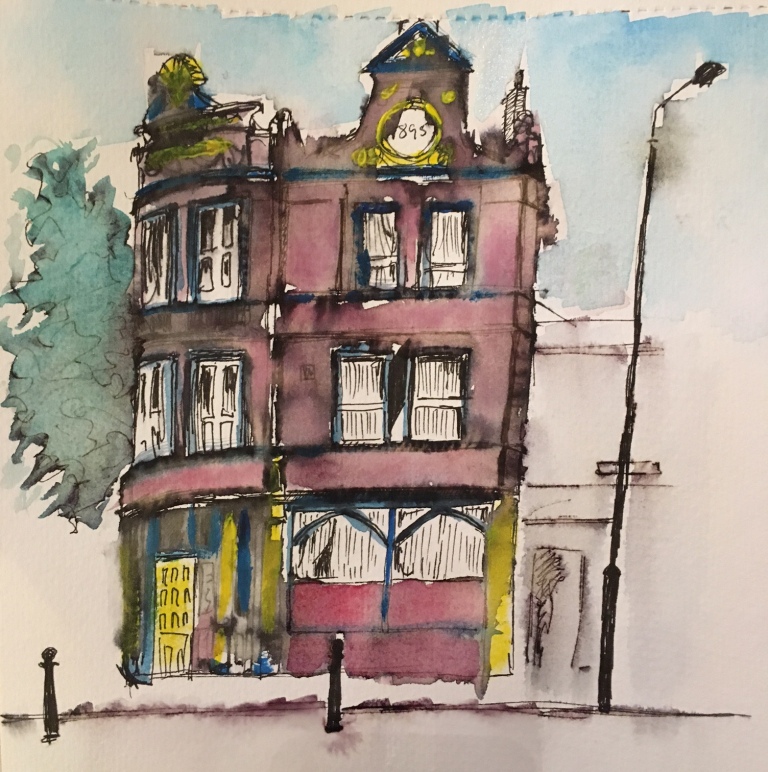 (A sketch of an image from London’s Lost Pubs project)

Following the Seven Stars we made our way along Fleet Street to the Old Cheshire Cheese, a pub with vaults that plunge endlessly down into the London underworld, as you navigate low arches and narrow stairs and higgledy-piggledy nooks and chilly alcoves.

In Popham’s day at least it was ‘the most-talked-of tavern in Fleet Street, if not in the whole of London… “The Cheshire Cheese” is the magnet that draws all overseas visitors to Fleet Street, especially those from the Land of Prohibition.’

Popham notes the sad demise of the pub parrot – ‘The “Cheshire Cheese” parrot is probably known as far afield as the house which it adorns. Its language is to have considerably improved since the end of the Great War and the demobilisation of the troops… After suffering for several months from pneumonia, the parrot died…It had been at the “Cheese” for upward of forty years.’

Fortunately for us, she is still welcoming guests to the pub from her position of honour behind the bar. An ex-parrot, and a little bit of London stuffing to flavour our crawl.

They even have a chair that purportedly belonged to Samuel Johnson, and despite both my cynicism and my museum training, I took the opportunity to touch it, as if it were some saintly relic that could bestow powers of… something… to me, or link me somehow through the centuries to a man who is still quite alive in the London imagination.

Popham finishes by telling us, ‘Visitors should on no account miss the vaults, which are centuries older than the tavern…’

It’s true, what appears to be a small, furtive pub only reveals its endless and cavernous layers as you descend twisting Escher staircases and cellars. Outside there was barely a soul to be seen, and Fleet Street itself was quiet, but within there were unexpected crowds of Londoners and tourists alike. We each enjoyed a stout and a spot of lunch within this bustling Mos Eisley atmopshere.

From here, we made our short way to the Old Bell, which stands in the shadow of Sir Christopher Wren’s magnificent Church of St Bride. There are many interesting things about this church, which is thought to be one of the oldest sites of Christian worship in the country and that St Bride is Brigid of Kildare who, as with the Irish Marian cult, has roots that burrow deep into a lost pagan past.

It was also the church where Eleanor White married Ananias Dare. They would make a perilous journey to a new world and on 18 August 1587 on Roanoke Island, Eleanor would give birth to Virginia, the first English child born on North American soil.

The pub, according to Popham, had burned down in the Great Fire of London, and as the church was being rebuilt by Wren, Ye Olde Bell ‘was re-erected at the same time in order to supply the needs of the workmen’.

The pub survived the Blitz, remarkably, although the church was badly damaged and later restored. Part of the rebuilding process revealed some of the original 6th century Saxon foundations and the crypt now displays some of the interesting finds and relics. Sadly, I didn’t discover this until after we were there, and we lost the opportunity to explore.

Today the interior of the pub is indistinguishable from any other generic Wetherspoonsy pub. We swapped to traditional ale here, but didn’t stay long.

And as this post is getting a little long, I think we’ll leave it there and pick it up again another time. Cheers…