I am a seaside dweller in the conurbation of Bournemouth and Poole, which apart from the shore is sprawlingly uninspiring,  and I thought I’d see if there was a way of capturing my home town in a series of landscape images.

Bournemouth is a Victorian town and therefore doesn’t carry the weight of the centuries like other towns and cities. It does have this extraordinary clifftop location though, with chines running down onto the seafront, and a huge sweeping bay looking eastward out to Hengistbury Head and the Isle of Wight, and westward to Purbeck and Old Harry Rocks.

The town feels like it is precariously balanced on the bones of sleeping giants, and we are ignorant of the monstrous lungs breathing beneath our feet. I walk along the beach every day and see it laid bare in all the seasons. From the swarming summer madness to autumn mornings when the pine shadows flex coldly out across the sand there is always some fascinating detail to be seen.

There is some odd mismatch between the vast curve of the shore, and the tacky stag and hen-dos, between the monumental crash of the sea and sky, and the Pantone beach huts. Bournemouth is still stretching out its roots, and there is a feeling of dislocation and weightlessness, I think, as a result.

There are strange characters to be found on the beach, transient, flotsam characters. Dog walkers and rough sleepers and cyclists and foreigners and merry-makers and those seeking something in the peace of the sea.

And I also feel a sort of detachment, the meditative quality of walking, of the mind wandering in whirling skies, of being lost in the sounds of the sea, and drifting off beyond the horizon. How does walking here shape the landscape of your thoughts?

I became interested in psychogeography when I watched the documentary version of London Orbital, and it was reignited years later when I went to a talk about Arthur Machen’s London perambulations at the Housman’s Bookshop in King’s Cross.

I love this strange genre of urban re-imagination, that is an ephemeral mix of walking, poetry, science fiction, architecture, photography, the exploration of liminal spaces, history, geography, psychology, town planning, horror, the art of getting lost, encounters with strangers, flaneurie, graffiti, politics, playfulness, discovery, urban legend, folklore, hallucinations, dreams, ley-lines, occultism, cartography, archaeology, bollard-spotting, edgeland adventures and a whole lot of other stuff. It’s not really a genre at all, it’s a whirlpool of wild ideas, an artistic response, an urban mythology.

I wanted to explore some kind of psychogeographical approach to Bournemouth. I haven’t figured it out yet, but I’m still experimenting. It is in part a study of the overlooked, but also a response to how the weather changes the landscape, and how it changes the wanderer.

I’ve kept a sort of diary of explorations over the last year or so, and have pulled out some phrases which I have used as captions for the images. I’m not sure they all fit particularly well, but I feel this is a good sketch-book process of trying out ideas. I might try making some maps. Maps are magical and concrete in equal measure. Anyway, here’s what I have for now. 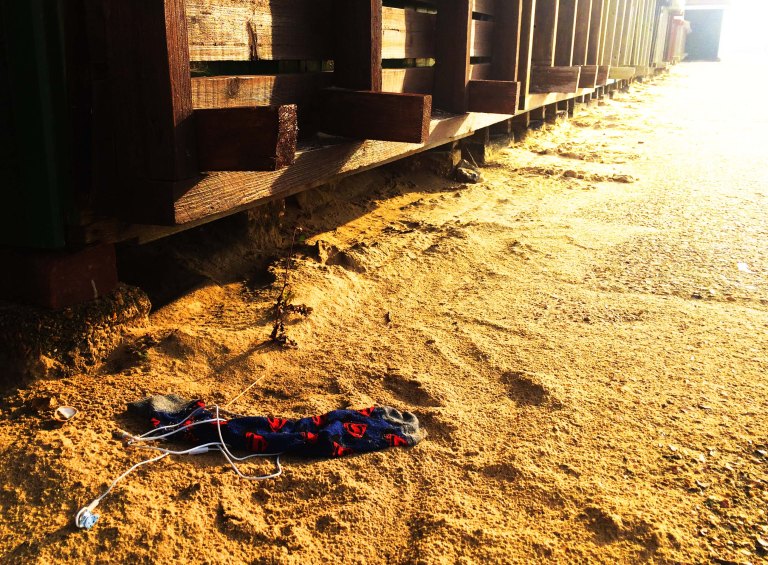 Washed up, the night’s revels, like seaweed. Spontaneous sculptures and rivulets in the sand, and discarded shells and litter. Two worlds split by the dawn.

The right angle, a funny angle, and I’m walking in a city on an alien world.

Faded but proud from the front, the rot is hidden behind. Gargoyles on cliff tops. 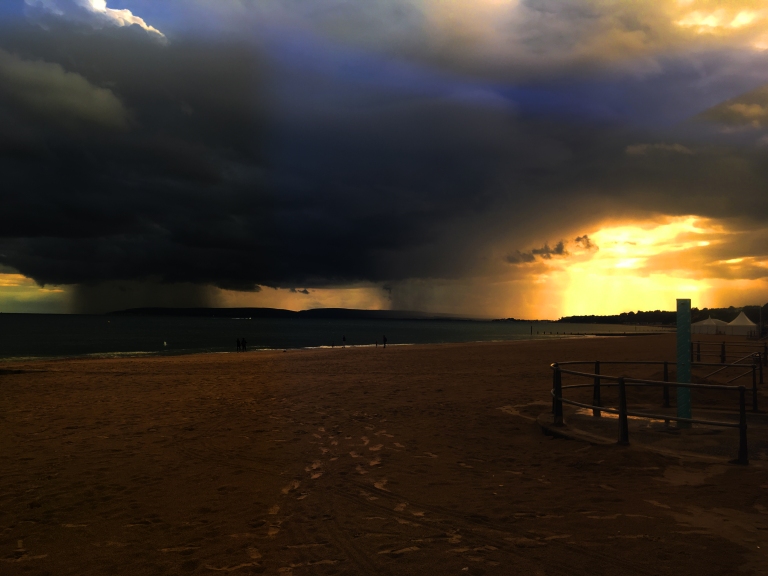 Yesterday the sky was a diamond white, and calm, and today it is full of furious gods…

It’s like great clouds have risen out of the sea and pour drenching water down as they lift above the curve of the shore.

The chine is always damp and dense, and when you near the bottom the first glimpse of the sea is always different.

…red and ochre skies washed up from Other shores…

…the scuttling pier… waves of rain…

Bournemouth sits uneasily by the sea, and I suspect the true Bournemouth is not the glamour of the coast but the endless, soulless suburbs, where people live out their everyday lives as remote from the sea as any inland town.

And even on the coast, the Victorian grandeur crumbles and is ripped down, replaced with monotonous flats and plastic hotels and bouncy castles and zipwires, and all this fleeting life skims gaudily on the surface, while something far more nebulous slowly churns away beneath the earth and the sea.

I’m keen to explore psychogeograpy further as a subject, and have a couple of projects I can play around with – one is a London pub crawl that has been on the back-burner for a few years – the art is in the drinking and the walking and also in the writing of it – and the other is just to pick out some of my favourite walks and see what artistic response I can develop from them.